A little over a year ago, I wrote a blog about one of the most popular members of Broadjam.com, Nashville Joe.  A few weeks back, I met him in person for the first time. He was in a hospital bed in Port Charlotte, Florida fighting a cancer battle, one surgery after another.

Early in September, a couple of Broadjam members contacted me and asked if we could do something special for Nashville Joe. So a bunch a folks got together and bought his downloads on the Broadjam site. We sent him a check in September and his spirit was lifted, but his battle with cancer continues on.

I was traveling to see my mother, who lives a couple of hours from Joe and took a day to drive to Port Charlotte, Florida to see him. I had called, texted and emailed, but didn’t receive a response in the few days prior, it was unlike him. So I reached out to a few of our

mutual friends on Broadjam. Susan Witzel had contacted his sister through Facebook and she forwarded the number of Joe’s friend Peter.

Peter has been helping Joe cope on a daily basis and is assisting with the insurances, paperwork and all of the other “life” things that have to be dealt with during times like this. He met Joe a few months back and immediately warmed up to him as well. Peter was thankful that I was coming to see Joe, but after being there, I am so thankful for him. It’s people like him that make humanity great. He doesn’t have to do this. But he does.

Joe certainly looked like he’d been through the ringer and maybe at times, his mind wanted to throw the towel in. But deep inside, one could still see his heart and soul still fighting the battle. His personality continues to shine and his spirit is as strong as ever. He loves talking about songwriters and the friends he has met along the way. On occasion, I have the opportunity to meet a member who has been on the site for years and sometimes they are a little different than I expected. With Joe, it was exactly as I knew him to be online. There are no pretentions, he is who he is, all the time.

Again, here is the story I wrote about a year ago.

Just as I was sitting down to write this, Joe called. So I have modified the previous paragraphs slightly and now adding a couple of more.

He said, “Ya know what I love about Broadjam?”, I replied, “What’s that Joe?”, “Ya got all this crap going on in the world and Broadjam just flows like a river. People from all these countries all flowing and working together. That’s what I love about it.” Joe told the story of when Bob Dylan went to visit Woodie Guthrie near the end of his life. He said, “that’s what our visit reminded him of.” I had never heard that story, but it just goes to show how much all songwriters care for one another.

As I was leaving, Joe said, “I want you to have that guitar.” There was a guitar case laying next to his bed. I was a little surprised and said, “I can’t take your guitar.” He said, “I want you to have it.” Needless to say I was a little shocked. He added, “I am too weak to play it.” After we discussed (slightly argued) this for about a minute. I offered, “I will take this on one condition. I am just going to hold it and when you beat this, you get it back.” We agreed. All the way home, I had a tear in my eye thinking about Joe and the unfairness of it all. In my head, I kept thinking about him, the guitar, his battle, his friends on Broadjam, the generosity of his friend Peter and his overall spirit. He has touched so many lives as he continues to provide positive feedback to so many musicians around the world. He touched another one that day and I will never forget this two hours of our lives. 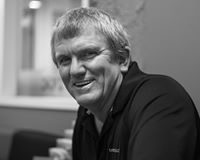